At what stadium can you find blue turf? That would be at Albertsons Stadium in Boise, ID where the Boise State Broncos play. The Broncos have the most recognizable and most famous playing field in sports. Unlike every other football team in the nation, Boise State is the only stadium to have blue artificial turf. Bronco Stadium opened in 1970 at a cost of $2.2 million and did not originally have a blue playing surface. The stadium replaced the old Bronco Stadium, a 10,000 seat stadium that was on the same location as the new stadium. On September 11, 1970 the Broncos played their first game at the stadium against Chico State in front of a sell-out crowd of 14,500.

Since its opening in 1970 there have been several expansions completed at the stadium. The upper deck was added on the east side in 1974, increasing the seating capacity to 20,000. A $10 million renovation project was completed in 1997 adding seats in the southwest and southeast corners of the stadium. This boosted the seating capacity to 30,000 and also included the addition of a Boise State Broncos Hall of Fame. Prior to the start of the 2008 season, a new three story structure was added on the west side that includes a new press box, club seats and luxury suites increasing the capacity to 32,000. The famous blue turf was the idea of then athletic director Gene Bleymaier. Instead of spending $750,000 of traditional green turf, he wanted a blue surface that would stand out and attract attention to Boise State football. It worked and Boise State is known throughout sports for its playing field. In May 2014 the stadium was renamed Alberstons Stadium after Albertsons LLC purchased the naming rights for $12.5 million over 15 years. Not only is Albertsons Stadium home of the Broncos, but the annual Famous Idaho Potato Bowl game. 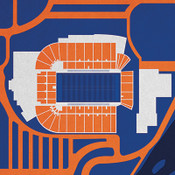