Site of the Olympic Games, the Super Bowl and the World Series, the Los Angeles Coliseum has hosted many historical games during its existence. Although many teams from different sports  have played at the coliseum throughout its history, the University of Southern California Trojans have called the coliseum their home since the 1930s.

Construction of a football stadium in the City of Los Angeles began in the early 1920s. Completed in less than two years, the USC Trojans played the first game ever at the Coliseum on October 6, 1923 against Pomona College. Nearly 76,000 bleacher seats circled the entire field. By 1930, the City of Los Angeles was awarded the 1932 Olympics. Over $950,000 was spent to enlarge the stadium to seat nearly 101,000 fans for the summer games. Although built primarily for football, in April 1958, the Los Angeles Dodgers (MLB) moved to the coliseum while their baseball stadium, Dodger Stadium, was constructed. In 1959, a football game between USC and Ohio State was played at the coliseum. A hour after its completion, the first World Series game in California was played. The Dodgers moved out of the coliseum after the 1961 season.

After its addition in the 1930s, the Los Angeles Coliseum changed very little until the 1990s. In 1993 a $15 million renovation project was completed as actual seats were installed, replacing the bleachers, and fourteen rows of seats were added, raising the capacity to 92,000 after the field was lowered 14 feet. Unfortunately, a massive earthquake in 1994 required over $93 million in repairs.  Prior to the 1995 season, a new press box was constructed at a cost of $6 million. Although the stadium has a seating capacity of 92,000, the Trojans often cover some of the seats lowering the seating capacity to 68,000. Other than being home of the Trojans, the Los Angeles Coliseum has also been the home of the NFL’s Raiders and is the present home of the Rams until their new stadium opens in 2019. The Coliseum has been the home of many great sporting events including the 1932 and 1984 Olympics, the 1959 World Series and Super Bowl games. At the coliseum, the Trojans have been one of the most dominant teams in college football winning 38 conference titles, 11 national championships and home of seven Heisman Trophy winners.

In October 2015 USC announced plans for a $270 million renovation of the coliseum. The project began at the end of the 2017 season and was finished by the start of the 2019 season. It reduced the seating capacity to 78,467 as every seat was replaced with wider seats, increased the number of aisles and included the construction of a new building on the south side of the stadium that contains new luxury suites, club seats and a press box. Additionally, the iconic peristyle was restored to more closely resemble the stadium’s original design. Two new HD videoboards were installed at the east end of the stadium. This iconic and historic facility remains one of the best football stadiums in the country. 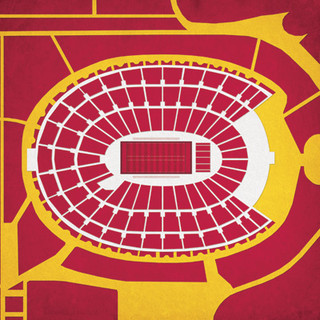