Don’t be alarmed if you are greeted with a “Howdy” and a conversation you are having ends with “gig em” instead of goodbye. It simply means you have taken part in one of the many traditions at Texas A&M—a tradition that helps students and fans maintain their legendary Aggies Spirit!

Some Aggie traditions started over one hundred years ago when the university was founded as a rural military and agricultural school. Although, military training is no longer required, the university still has respect for military traditions and values. In fact, the Aggie’s call themselves the “12th Man,” meaning they are there to support the 11 players who are on the field. To further symbolize their respect, the student body stands throughout the game and when a player is injured the students step off of the bleachers and onto the concrete. These are just a few of the many traditions that have built the university and its student body into being one of the most enthusiastic, loudest stadium’s in college football.

The history of Kyle Field dates to the mid 1920s when it was constructed in two phases, 1927 and 1929, and named after Edwin J. Kyle, the athletic council President and the Dean of Agriculture who led the way in getting a new facility built for the Aggies. Originally with a single tier grandstand in a horseshoe configuration around the playing field, Kyle Field has grown enormously since it opened in 1929 with a seating capacity of over 32,000. The first expansion came prior to the 1967 season when the second decks on the east and west sides of the field were constructed.

The next expansion was completed before the 1980 season, when the third decks were added. With this addition the grandstands towered over the playing field. The original grass field was replaced by Astroturf in 1970 but reverted back to grass before the 1996 season. A $32.9 million expansion and renovation project was completed before the 1999 season. The original stands on the north side that formed the horseshoe were removed and a new massive three tier grandstand was built. This section, known as “The Zone” houses luxury suites, club seats, and the Texas A&M sports museum. This increased the seating capacity to 82,600 with three, 3-tier grandstands located located on the north, east and west sides of the field.

In February 2013 Texas A&M unveiled plans to expand Kyle Field, making it one of the largest stadiums in the country. The $425 million expansion enclosed Kyle Field pushing the capacity to 102,512, making it the largest stadium in the SEC and one of the largest in college football. The two phases project was completed over two years. The first phase, completed by the 2014 season included demolition and reconstruction of the first deck on the east side, the addition of a roof covering the east side upper deck, construction of the south endzone seating structure and the largest videoboard in sports at 47 feet tall by 163 feet wide. Phase two was completed by the 2015 season and included demolition and reconstruction the entire west side of the stadium and completed construction of the south side of Kyle Field. The home of the Aggies is now one of the most intimidating stadiums in the country. 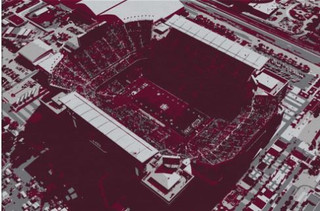