There is only one college football stadium in the nation where you will hear John Denver’s “Take Me Home, Country Roads” song blasting over the sound system and where you will see the mascot wearing a coonskin cap and carrying a rifle. Welcome to Wild and Wonderful West Virginia, where in the hills of Morgantown, sits Mountaineer Field, home of the West Virginia Mountaineers.

The stadium consists of a lower deck that encloses the entire playing field and upper decks on the east and west sides. Two additions in the 1980s increased the seating capacity of Mountaineer Field to over 60,000. In 1985, 7,500 seats were added to the south end zone and the following year an additional 6,000 seats were added in the north end zone. However, the seating in the north end zone was removed in 2004 when 18 suites were added in 2004 to generate additional revenue for the athletic department. The original Astroturf playing surface was replaced with Astroplay in 2002 and FieldTurf in 2007. Before the start of the 2008 season a new 85′ wide by 23.6′ high video/scoreboard was installed, replacing the existing one. A new HD video/scoreboard measuring 97.2′ wide by 37.2′ high was added in the north endzone, directly atop Touchdown Terrance, prior to the 2017 season. In recent years WVU has become one of the top football programs in college football and fans hope that will continue with the Mountaineers move into the Big 12 Conference. 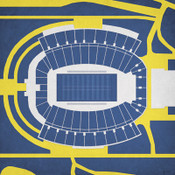