A sea of orange, fans going crazy, Pistol Pete and the announcement, “Here….comes….bullet!” describes the scene at the oldest football stadium in the Big 12 Conference, Boone Pickens Stadium. Football has been played at the site of Boone Pickens Stadium since 1913 when temporary bleachers were built. Known for one season as Athletic Field, it was renamed after Dr. Laymon Lewis, a former dean of the veterinary medicine. A permanent 8,000 seat structure replaced the temporary stadium in 1920 and the gridiron was situated in a north-south direction. However, soon after opening, it was moved to an east-west direction because of strong winds that affected play on the field. By 1924, stands were constructed on the south side of the stadium and six years later the capacity increased to 13,000 as stands were built on the north side. The next expansion occurred in 1947, when the south stands were extended to seat 30,000 and a press box was constructed.

Three years later, the team expanded the north grandstand, giving Lewis Field a seating capacity of 39,000. In 1972, the track surrounding the field was removed and the field was lowered 12 feet allowing 20 rows to be placed around the field. In addition, the natural grass field was removed and replaced with Astroturf. A new press box was built in 1980 and night football was played for the first time in 1985. In 2003, Lewis Field was renamed Boone Pickens Stadium, after famous Oklahoma State alumni,  Boone Pickens’ numerous and substantial donations to the school. Prior to the start of the 2004 season, $74 million was spent on the south side of the stadium adding a new pressbox, luxury suites and a new brick facade. The latest expansions to Boone Pickens Stadium were completed in 2009. Seating was added on the west side of the stadium increasing the seating capacity to 55,509. 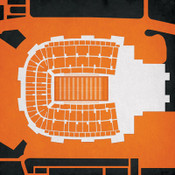