From the moment you arrive within earshot of Neyland Stadium, you know you are in Volunteer country.  Sure it would be easy to ignore the game with the beautiful Smoky Mountains in the distance and the calming flow of the Tennessee River right beside the stadium, but then you snap out of it as over 100,000 fans rise to their feet to cheer on the Volunteers. Vols fans erupt at the site of the team emerging onto the field through the band, always in the shape of the letter T, across the trademark checkerboard orange and white end zone as they take their place on the field of battle. Like most stadiums of this enormous size, Neyland Stadium was born of humble beginnings. In 1919, W.S. Shields, a University of Tennessee trustee and President of the local bank, provided the money for a new stadium for the football program. Completed in 1921, the stadium was originally known as Shields-Watkins Field, after Shields and his wife Alice Watkins. The Volunteers played their inaugural first game at the stadium on September 24, 1921 against Emory and Henry. A far cry from what the stadium can hold today, originally it could only seat 3,200 in a single tier grandstand located on the west side of the field. The first of 16 expansions of the stadium began in 1926, when a grandstand that could seat 3,600 was constructed. The same year, famous Vols head coach, Robert R. Neyland, began his tenure as head of the football program.

Expansions to the stadium have continued over the years. In 1929, an additional 11,060 seats were added on the west side, 12,000 seats on the east side in 1938, and stands were constructed in the south endzone by the 1948 season, bringing the capacity of the stadium to 46,390. Shields Watkins Stadium was renamed Neyland Stadium in 1962, after the famous Vols head coach. Also prior to that year, the first of the upper deck was constructed on the west side, boosting the capacity to over 50,000 and also adding a new modern press box. Additional seating was added in the north endzone and upper deck before the 1966, ‘68, ‘72, and ’80 seasons, increasing the seating capacity at Neyland Stadium to 91,249. In 1987, 42 luxury suites were added to the stadium and an additional 78 were added prior to the 2000 season. The last large addition to Neyland Stadium was completed before the 1996 season, when 10,642 seats were added in the north upper deck bringing the capacity to 104,544. Artificial turf was at the stadium from the 1968 season until 1993, when it was replaced with grass.

In 2004, the University of Tennessee approved a $200 million master plan to expand and renovate Neyland Stadium in five phases. The first phase included renovating the east side in 2006 by adding new club seats. This decreased the seating capacity to just over 102,000. The next phase was completed on the west side before the 2009 season as skyboxes, the pressbox and club areas were renovated. The concourses were also revamped and expanded with new restrooms and concession areas. Also included in this renovation project was the installation of a 4,000 square foot HD video/scoreboard. The third phase of renovations to the Volunteers home was completed by the 2010 season. This phase includes the Tennessee Terrace, a 1,800 club seat area, the Gate 21 plaza and a new brick facade. Today the capacity of Neyland Stadium is 102,455.

Today, Neyland Stadium is one of the most well known stadiums in the sport. It is one of the loudest stadiums in football with two decks of seats enclosing the playing field. Expansions over the years have been worth it, as Neyland Stadium is consistently voted as one of the best college football stadiums. The stadium and its fans are also a powerful recruiting tool as Tennessee has produced some of the finest athletes in the NFL today and the Volunteers plan to continue this trend long into the future. 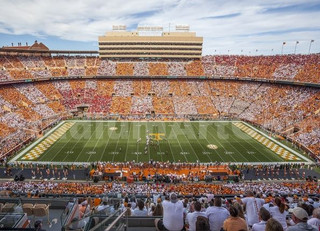 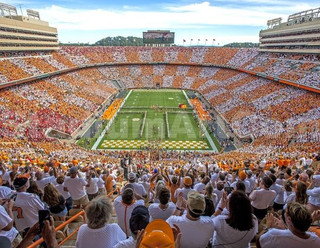