Referred to by opposing teams as Death Valley, Memorial Stadium, home of the Clemson Tigers, is one of the most intimidating stadiums for visiting football teams in the country. This intensity begins with one of the grandest entrances in college football beginning with a cannon firing and the Clemson Tiger band playing, “Tiger Rag.” The Tiger football team touches Howard’s Rock for good luck before running down onto the field as fans at Memorial Stadium go crazy.

The history of Memorial Stadium dates to the mid to late 1930s when Clemson officials discussed building a new stadium for the football team. Football coach at the time, Jess Neely, was opposed to a new stadium, but his departure in 1939 led to the building of a new facility. In 1940, officials decided to build a new stadium on the west side of Clemson’s campus. Land was cleared and a 20,000 seat stadium was erected at a cost of $125,000. Named Memorial Stadium, the Clemson Tigers played their inaugural game at the stadium on September 19, 1942 as they beat Presbyterian College.

As the team’s success grew, along with its popularity, expansion of the stadium followed. By the start of the 1958 season, 18,000 seats were added along the sidelines. Two years later, an additional 5,600 seats were constructed at the west end zone. Both additions increased the capacity at Memorial Stadium to 53,000. With continuing success and growing fan support, upper decks were added in 1978 and 1983, bringing the capacity to over 78,000. The main lower grandstand is in a horseshoe shape with suites and luxury areas between the lower decks on the upper decks on the north and south stands. The latest addition to Memorial Stadium occurred before the 2006 season. This project, on the west side of the stadium, includes club and general seating, an athletic heritage museum and new locker rooms, increasing the seating capacity of Memorial Stadium to 80,301. The Clemson Tigers remain a team to be reckoned with in the ACC. Throughout their history at Memorial Stadium, the Tigers have won more than 70% of their home games. The stadium has become known as Death Valley for several reasons. It sits in a valley, the university cemetery once overlooked the field before the construction of the upper decks and opposing teams have claimed to be “killed” at Memorial Stadium. “Howard’s Rock” located at the top of the hill in the east endzone was a gift from an alumnus, a rock from Death Valley, CA, given to Coach Frank Howard in 1966. It has been the home to four national championship teams: 1981, 2016, 2018 and 2019. 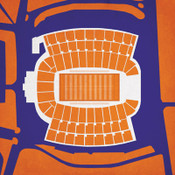