Picture this…four video scoreboards and a roaring crowd of nearly 100,077 fans chanting “Rooooolllll Tide, Roll.” Where are you? That’s right; you’re at Bryant-Denny Stadium, home of the Alabama Crimson Tide since 1929 and the winners of 18 national championships. The recording of former coach Bear Bryant’s voice is broadcast throughout the stadium. The University of Alabama’s “Million Dollar Band” of around 400 truly sounds like a million dollars, as they lead the crowd into the Alabama fight song, “Yea Alabama,” the fans can’t help but show their team spirit. In the final minute of a football game when there is no question that Alabama has whipped its opponent the Million Dollar Band leads the crowd into the “Rammer Jammer Cheer.”

Today Bryant Denny Stadium is one of the largest stadiums in the nation; however it took hard work and multiple expansions to finally reach this point. The University of Alabama has played football for over a century, but it took nearly four decades before they began to play at Bryant Denny Stadium. Prior to the opening of Bryant-Denny Stadium, the Tide played at Denny Field and University Field. By the mid 1920s the University of Alabama decided it was time for a new football facility and built a 12,000 seat stadium. The Tide christened the stadium, originally known as George Hutchenson Denny Stadium, on September 28, 1929.

Throughout the 1990s, as demand for tickets to Crimson Tide game increased, so did the size of Bryant Denny Stadium. In 1998, the east side upper deck was constructed, bumping the capacity to 83,000. This project included 81 new skyboxes, a video/scoreboard on the south end, new lights, an east side entrance tower and a brick façade for the facility. Before the 2006 season, a $50 million expansion project increased the seating capacity to over 92,000, with new seats and skyboxes. A grand promenade was constructed to connect the stadium to University Boulevard, which is lined with larger-than-life statues of the four coaches who have brought Alabama its national championships. This area was named the “Walk of Champions.” Also lining Alabama’s Walk of Champions are inlaid granite tablets that commemorate the school’s multiple Conference Championships and National Championships. The seven story North End Zone Glass Curtain Wall gives Bryant-Denny the formal face it has always needed. In November 2008, Alabama announced plans to expand Bryant Denny Stadium to seat 101,821 fans. This $65.6 million expansion was completed by the start of the 2010 season. It includes a 8,500 seat upper deck, 34 luxury seats, 1,700 club seats, a 1,500 seat stadium club and two new corner video boards, all on the south side of the stadium.

In August 2018 the Crimson Tide announced plans for a $107 million renovation to Bryant Denny Stadium. This multi-phase project was completed in phases following the 2019 season. Included in this project are replacing the existing video boards will new larger ones, a new elevator bank on the west side of the stadium, reconfiguration of the Alabama locker room, expanding the recruiting room and a 10,000-square foot social area for students. Additionally the press box will be relocated to the east side of the stadium, replaced by 10 new luxury suites. This project reduced the overall seating capacity to just above 100,000. 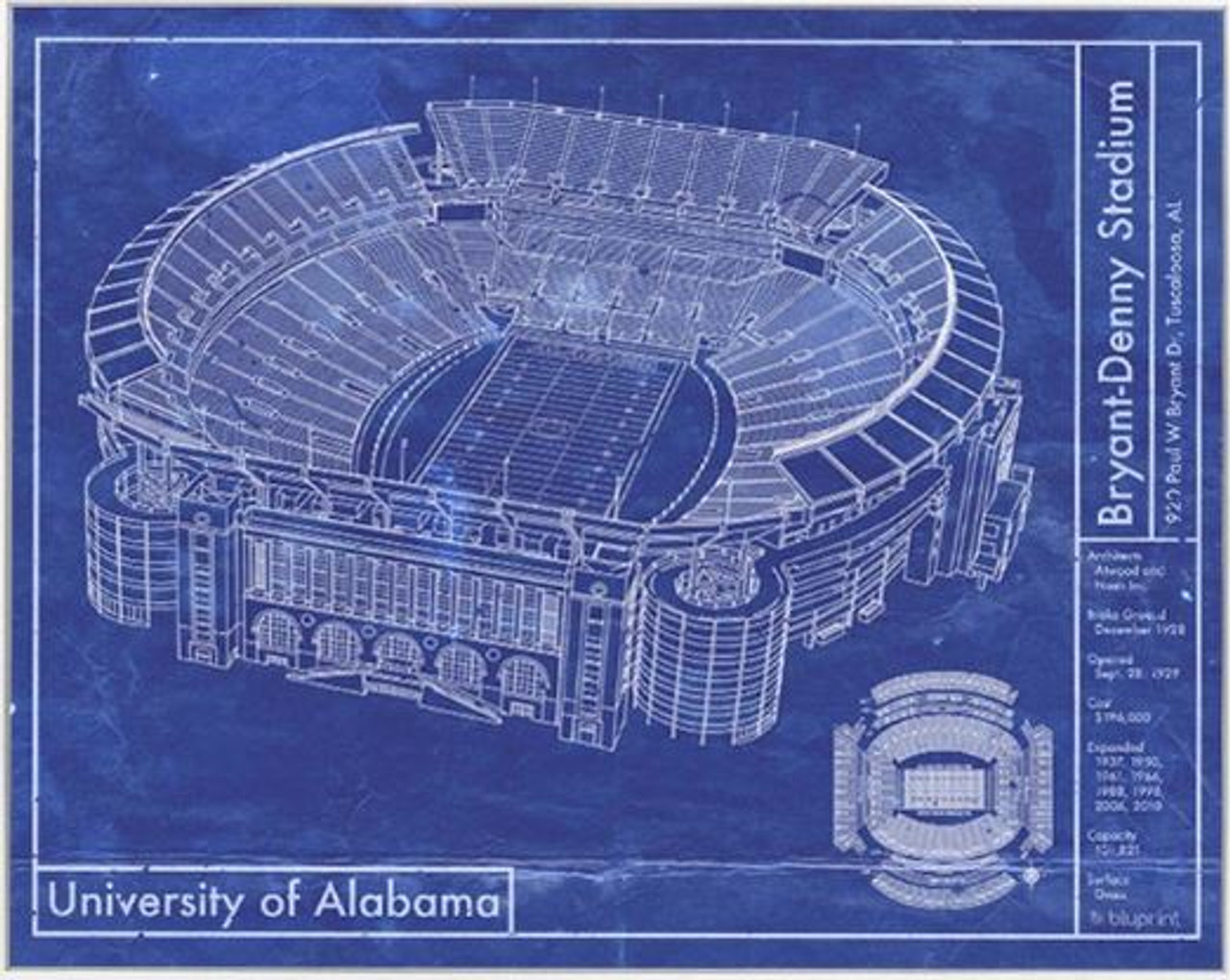 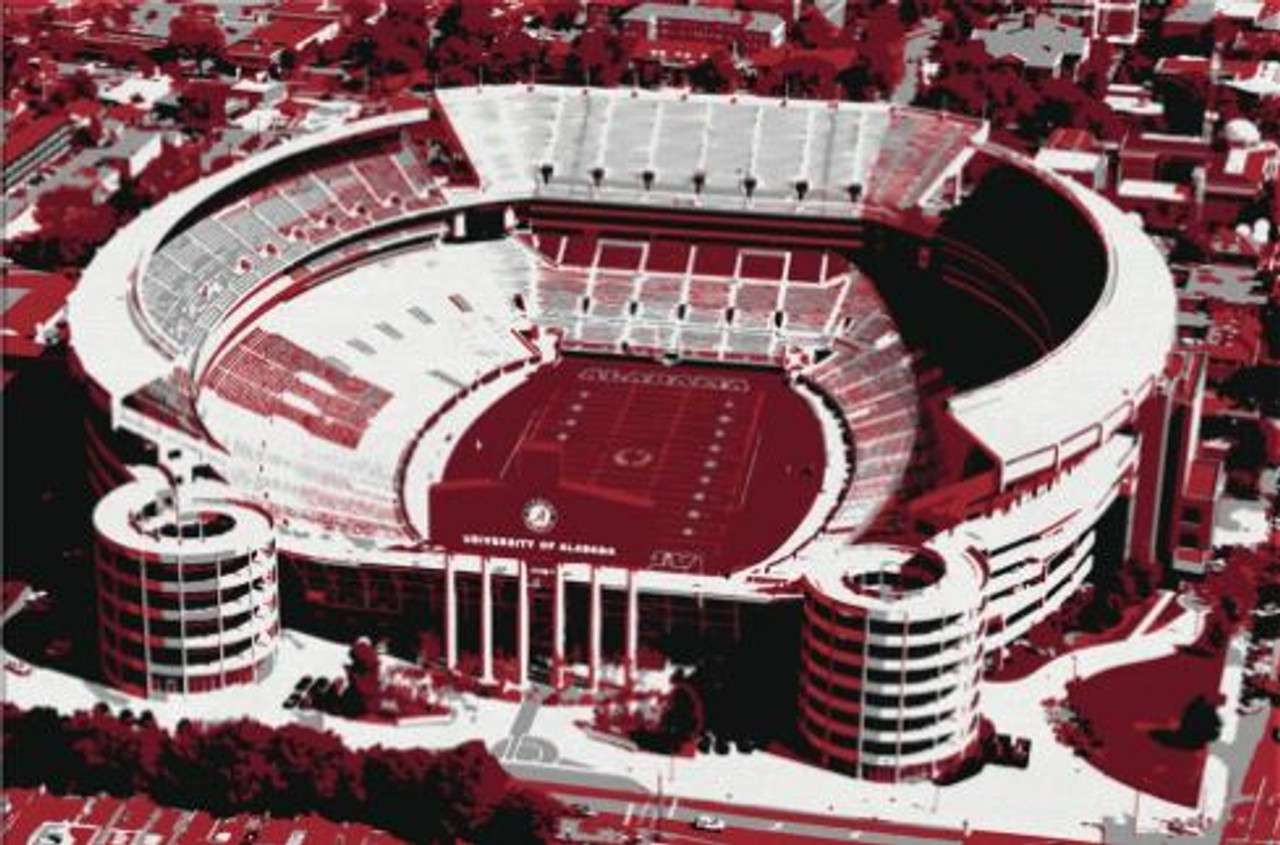 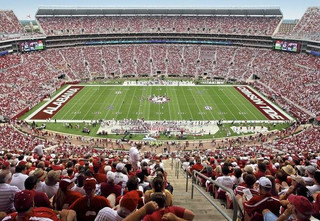 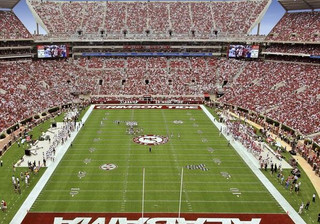