The Carrier Dome, home of the Syracuse Orangemen, is one the most unique stadiums in college football and the largest domed stadium on a college campus. Built for several university sporting programs, the Carrier Dome has hosted many events over the past four decades. By the middle 1970s, Syracuse University decided it was time to build an indoor facility to host football, basketball, track and many other sports. By 1979 plans were approved and in April construction began on the massive dome stadium. At a cost of $26.85 million, the Carrier Dome was completed by September 1980. The stadium was named after the Carrier Corporation paid $2.75 million for the naming rights.

The Orange played their first football game at the Carrier Dome on September 20, 1980. With a capacity of 49,057, the Carrier Dome is the largest dome structure on any college campus in the country. A three tier grandstand encloses the entire Fieldturf playing surface. The dome weighs 220 tons and is made of Teflon coated fiberglass. When snow approaches the Carrier Dome it is heated to 145 degrees to prevent it from collapsing. In March 1993, the dome was deflated because nearly four feet of snow fell in the Syracuse area. As of 2020, snow will no longer be an issue. In May 2018 the university unveiled plans to renovate the Carrier Dome. Completed by the 2020 season, the multi million dollar project includes replacing the original air-supported roof with a translucent fix roof, installing air conditioning as the dome never this, upgrades to restrooms, concessions and concourses. The feature most fans notice is the large HD videoboard that is located above the center of the playing field. 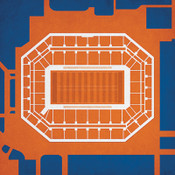