Over the past 30 years of games played at Fred Yager Stadium, none are as popular as the one between the Miami-OH Redhawks and the Cincinnati Bearcats as they battle for the Victory Bell. For 86 years the Redhawks played at Miami Field, the second oldest college football stadium when it closed in 1982. Because of its age, a new stadium was needed for the Redhawks. Construction of Fred Yager Stadium began in 1982 and completed by the 1983 football season.

The team made their debut at the stadium on October 1, 1983 against Western Michigan. The stadium was named after Fred Yager, a 1914 graduate of Miami who supported the athletics department and had a seating capacity of 25,000.  Before the start of the 1995 season, 5,000 seats were added to the stadium giving its current capacity of just over 30,000. Fans continue to come out each fall to watch quality football and to watch Cincinnati and Miami square off for the annual Victory Bell. This annual match up is ranked fifth on the list of most-played rivalries in college football. 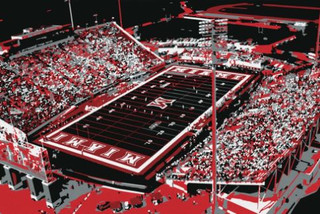